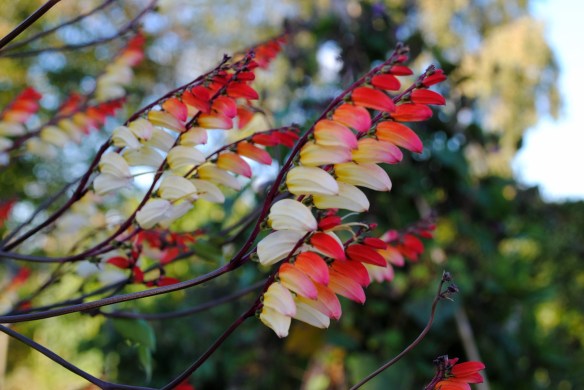 A kind friend gave me just one tiny seedling of Mina lobata or Spanish Flag back in May and I didn’t really know what to expect. I thought it might climb a cane so I put it at the end of a row of Sweet Peas. It spent the summer growing a huge number of stems and leaves but stubbornly refused to flower. Then, on 14 September I went on holiday for three weeks and when I came back, this is what I found!

The tiny little plant had morphed into an enormous thug with literally thousands of pretty red, white and orange flowers on hundreds of stems. What a performance! It did get some water and comfrey back in June and July when the sweet peas were there but apart from that it had no special attention. In fact, I neglected it completely believing it was probably a dud. How wrong I was. It is a stunner and definitely one to grow for late summer colour in future. It looks like the flowers will yield plenty of seed heads so I can repay the favour to all my unsuspecting friends next year too!

One good turn deserves another!

2 thoughts on “Raise the Spanish Flag”