It is still early in the year, cold and wet, but Spring is definitely just around the corner. The garden is slowly waking from its winter sleep, buds are breaking and shoots are stirring.

I am very behind with all the clearing and pruning jobs I had planned to have completed by now. The new weed-free turf I laid three years ago looks thin and scruffy with moss under the trees and daisies beginning to take hold. As soon as I can I will aerate and scarify it but currently it is too squelchy.

All around me, everywhere I turn at the moment, it’s all about snowdrops. I am not a ‘Galanthophile’ but I admire snowdrops for their guts and determination to make an appearance at the coldest time of year, sitting in frozen ground and often covered in snow, which just goes to show how tough these fragile beauties really are. One of my neighbours recently had their drive re-surfaced with tarmac but that wasn’t going to stop the snowdrops, oh no, they managed to push their way up between the tarmac and the wall! 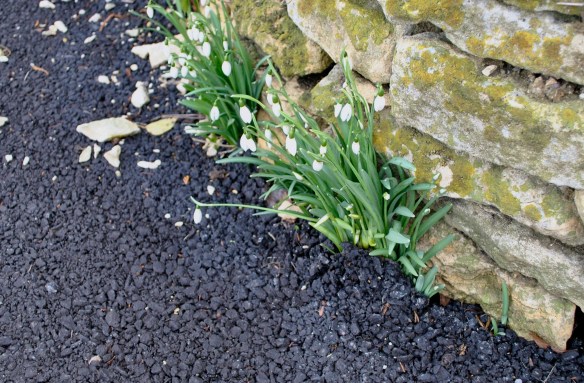 The Hellebores are stretching their necks and unfolding their flowers ready to announce the arrival of March and longer days. My little patch is in the wrong place but they hate being moved once established so I have decided to work around them and to lift their seedlings each year to start a new colony under the trees where I would prefer them to live. 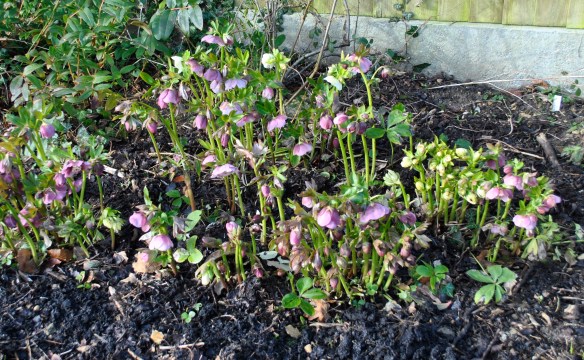 Another sign that things are improving is the arrival of our slimy friends the slugs. I have found a few keel slugs venturing out from their hiding places to investigate my Delphinium seedlings, gourmet food if you are a slug. However, I was just about to reach for the slug pellets when my conscience got the better of me and I remembered a promise I made to avoid chemical controls and use an organic alternative. I recently heard about ‘Slug Gone’ wool pellets which have received good reviews and so this is the new deterrent.

They look rather like rabbit food but smell dreadful, a bit like a dead rat. They are made from the fleece around the sheep’s bum area which absorbs the potassium salts from the sweat glands. When you wet them they go mushy and spread out. It is this wet smelly woolly consistency that the slugs don’t like and apparently go off in search of pastures new. Come to think of it, I have never seen a slug on a sheep’s bum so they must work.

So far, so good. No slugs have returned to the Delphiniums and I am not concerned about the Labradors dying from chemical poisoning or the Blackbirds eating poisoned slugs.

5 thoughts on “Signs of Spring”