This variety of the popular north american Bidens aurea was introduced many years ago by Hannay’s Nursery in Bath and is one of the hardier forms which is why I decided to try it here in the chilly Cotswolds. The seed, which is barbed helping it to hitch a ride from grazing animals, came from last year’s Cottage Garden Seed Exchange and was easy to germinate into very sturdy little plants. However, during April, May and June they just sat there at about 30cm tall waiting for some warmth and sunshine.

I had read that this form of Bidens can run and become a bit of a thug if it likes your soil and aspect so I decided to plant it carefully in several very different parts of the garden. To my total surprise, it has done best with it’s feet in sticky clay and is now 120cm high and still growing. The flowers are a lovely lemon yellow tipped with white, similar in size and shape to Coreopsis to which it is closely related. 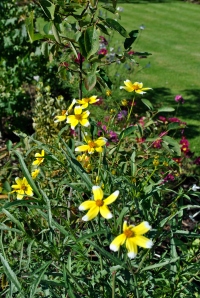 The dark green foliage and wiry green stems makes me wonder why this daisy species is an ‘aurea’ which usually means ‘golden’ or ‘yellow’ foliage. Perhaps it refers to the yellow flowers although this would be a departure from the usual nomenclature rules.

Received wisdom suggests this variety should be treated like a Penstemon, often hardy enough but take cuttings just in case. Also, don’t cut the old foliage down until April to give some protection over winter. I am going to collect my own seed and grow a few new plants each year given how easy they are to propagate. 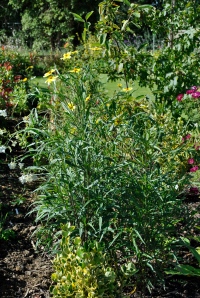 The tall airy stems are strong and upright and do not require staking, a definite bonus in my windy front garden, and the flowers seem to last for ages attracting bees and other pollinating insects. Overall, a very garden-worthy plant for late summer colour which blends in well with reds, purples, yellows and whites and doesn’t mask the plants behind it. I have it planted in front of my Photinia hedge with white and dark purple Cosmos, Agastache and Nicotiana alata and alongside permanent shrubs of Euonymus japonicus and Amelanchier lamarckii. It just seems to work.