I have always believed that garden birds generally take the red berries first followed by the yellow berries, then, if they are hungry enough, the pink berries and finally, almost reluctantly, they might take the white berries. 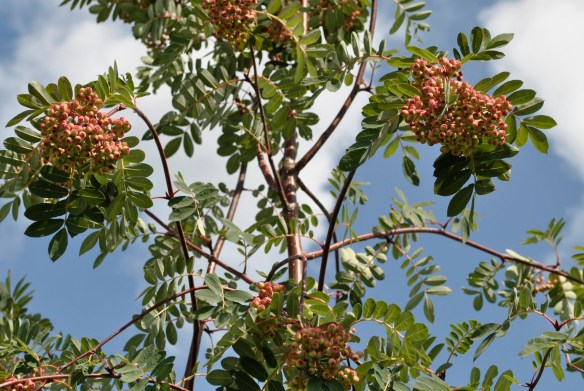 I therefore found it strange that this year the pink and white berries of my Rowans, Sorbus hupehensis and Sorbus cashmeriana are already stripped bare while the Hawthorns, Cotoneaster and Pyracantha are still laden with red and yellow berries! The Blackbirds, in particular, relished the white berries and performed incredible feats of balance and ingenuity to get them from the very ends of the wispish branches, bending them double and often jumping from one stem to another or taking them on the pass as they descended.

I read that flocks of Waxwings are coming to Britain this year due to the poor berry harvest in mainland Europe so I am hoping to see my first one this year. We have already had Redwings, Fieldfares, Blackcaps, Jays and Woodpeckers, partly attracted by the variety of food we put out daily, but also the wonderful feast of berries in Gloucestershire this year. Incidentally, we have found that one of the favourite foods is leftover raw pastry from the mince pies and the trimmings from marzipan. Another idea I like the sound of is an old coconut shell filled with super-saver crunchy peanut butter (340g jar is 62p from Morrisons or Asda) mixed with birdseed and porridge oats.  It’s a different take on using suet and seeds but even more delicious! Watch out for squirrels though, they love peanuts so try to make it inaccessible to them. 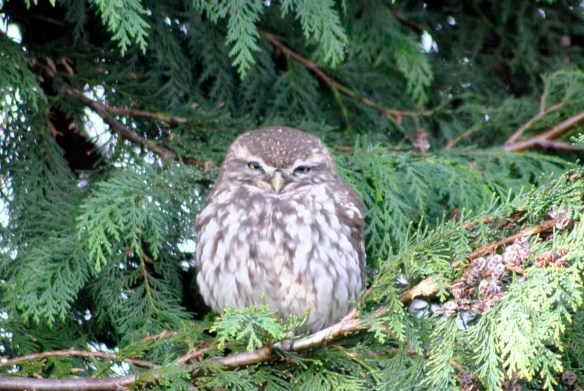 The Wise Old Owl…….scared all the little birds away!

This little chap turned up this morning after a frosty night, took up station in the Thuja tree near our bedroom window and sat there watching us! He is only the size of a fat Thrush, particularly when he fluffed himself up to keep warm.

We were excited at his arrival and were hoping he would stay until we realised that his presence was not quite so welcome among the regular garden visitors. Suddenly there was a terrible commotion as the Blackbirds started shrieking at him, obviously telling him in no uncertain terms that he should hoppit! Then the Great Tits and  the Chaffinches joined in. He just sat there impassively, not bothered and not moving. Then they mocked him, and I don’t mean they made disparaging remarks! Time and again they swooped and almost knocked him off his perch but still he ignored them until, finally, the Magpies arrived and that was his signal to quit. Off he went. 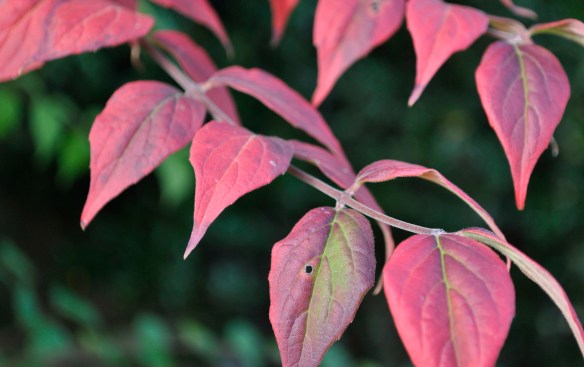 Autumn has suddenly taken over and there are early signs of what might be a hard winter. The dog-rose hips are especially good this year and the ivy is literally heaving under the weight of millions of tiny flowers, promising a feast of berries to come. END_OF_DOCUMENT_TOKEN_TO_BE_REPLACED